Microsoft has always been a bit, oh...unusually interesting comes to mind, when it comes to their decisions on how to break up and market the different versions of Windows. Windows XP was pretty straight forward. Barring special editions of Windows that were released as a result of litigation or court proceedings, such as Windows XP Starter Edition for developing markets or Windows XP Edition N (released in Europe. The "N" was for, "Not with Media Player"), Microsoft made it easy for most of us with just two versions – Windows XP Home and Windows XP Professional. 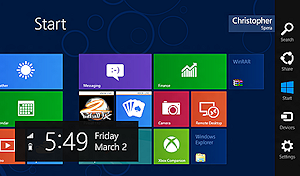 Windows Vista editions weren't as clear cut. Vista was released in five different editions – Home Basic, Home Premium, Ultimate, Business and Enterprise. Coming off the simplicity of Windows XP editions, no one could keep them straight. Windows 7 was identical with Starter, Home Basic, Home Premium, Professional, Enterprise and Ultimate. The Starter and Home Basic versions were stripped down and often installed on value-based hardware. These stripped down editions didn't fulfill their missions very well as that hardware could run the higher end editions, and could (mostly) do so without a performance hit. Feature sets, like Media Center, included in Windows 7 Ultimate, for example were the exception.

Microsoft is taking a “Windows XP Editions” approach with Windows 8. There will be two – Windows 8 and Windows 8 Pro. Windows 8 is the edition that most everyone will use. It replaces Windows 7 Home Premium and includes the ability to switch languages on the fly, which was previously only available in Windows 7 Enterprise or Ultimate.

Windows 8 Professional adds BitLocker and Encrypting File System support. It also has client Hyper-V virtualization and the ability to boot from a virtual hard drive (VHD). Windows 8 Pro is also the edition you’re most likely to see in the enterprise, as it also allows you to join a Windows domain, contains support for group policies and Remote Desktop host. Currently, these features are only available in Windows 7 Ultimate or Enterprise.
Both Windows 8 and Windows 8 Pro will be installed at the factory, and will be available at retail locations. They will be the only editions available, minus a couple other specialized versions available via corporate sales channels. For example, Windows 8 Enterprise will only be available to corporate customers with Software Assurance agreements.

Windows on ARM, or WOA, has been rebranded as Windows RT. Please note that it does not come with the Windows 8 brand, even though it has most of the same features and is built on the Windows 8 code-base. It will only be made available on ARM-based computing devices and only via factory install. It will not be available for purchase.

Pricing for all Windows 8 editions has yet to be announced.

While Microsoft may have a better handle on the marketing of their latest OS’ editions, we’ll have to see how the unfinished OS finally turns out. In my review of the Windows 8 Consumer Preview, I found that the tablet based experience was wonderful. My examination of MetroUI showed that it works very well on tablets and mobile devices. Its new Metro Apps were interesting, and should also work well on the same hardware. I have my doubts, however on the desktop experience.