Looking for the perfect gift for your loved ones this Holiday Season? A tablet may be just the ticket. Byte looks at the best tablets out there and provides guidance to gift givers looking to make just the right purchase.

A few years ago, netbooks were all the rage. Small, light, and cheap ultra-portable PC's were a serious purchase consideration when it came to Holiday gifts for school or college age users. They were especially popular with parents because they got you into a Windows machine for about $200-$300.

Then the iPad hit, and the world changed. Today, tablets are all the rage and netbooks are just a silly afterthought -- a dalliance that sidetracked most of the technology industry.  However, with their mobile broadband, Wi-Fi connectivity, and ability to create and edit documentation -- not to mention their ability to be eBook readers -- tablets satisfy the same needs, wants and desires as a netbook, plus offer it all in a form factor that's easier to carry, with more connectivity options than a laptop computer.

With discretionary cash at a premium for many this Holiday Season and so many different portable technology choices available, finding that perfect tablet for those on your gift list isn't as easy this year as it used to be. There are quite a few new players in the game. Thankfully, BYTE has pulled together a quick roundup of available tablets that may make this Holiday Season merry and bright. 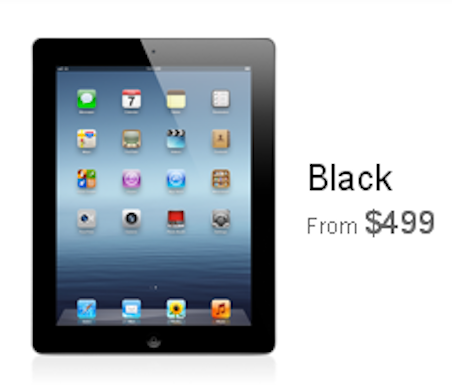 Apple has set the defacto standard with their 9.7" iOS powered iPad. With the right wireless keyboard and/or case and software, the tablet is effective as an eBook reader, note taker and basic Office suite machine. The recently announced Microsoft Office for iOS users will continue to help take the iPad to work.

Apple’s newest full sized tablet has its new Lightning Connector and A6 processor. Coupled with the their well established ecosystem and powered via iTunes, using an iPad as your main computing device is a very credible option, especially if all you’re looking for is basic functionality. It plays audio well. It plays video well. It works very well as a gaming platform, though true RPG and MMORPG-Types will want something with a great deal more punch.

The iPad is small, light and easy to carry. It has accessories that make it easy to type on and function as a full-fledged PC. It has communication options that are top notch, offering both Wi-Fi and mobile broadband options on multiple carriers. Combine that with the right data plan, and you more than likely have just the right tool for most road warriors and students wishing to carry as little equipment as possible.

The 4th Generation iPad is available directly from Apple; or any number of online and brick and mortar retailers and ranges in price from $499 to $829 depending on storage size and communications options.

Ok, take everything good and bad with the Apple iPad and rinse-repeat here; but put it in a very portable, easy to carry, 7.8" form factor and you have the Apple iPad Mini.

While its entry level price tag of $329 is about $80 higher than most people would have preferred, it appears that the iPad mini is as popular as most of us thought it would be, despite the higher-priced entry point.  With cellular versions just beginning to ship in advance of Black Friday 2012, look for all versions and flavors of the iPad mini to be high on Holiday Wish Lists.

The Galaxy Note 10.1 has nearly all of the same features as any other Android tablet and even the Apple iPad, though it does lack mobile broadband. However, the Galaxy Note 10.1’s S Pen satisfies the one thing that the Apple iPad doesn’t do — it allows you to easily take hand written notes, sketch, draw, and annotate documents directly on the screen and most importantly — and this is where the device distinguishes itself from the iPad — does so eloquently.

The Galaxy Note 10.1 is the first full size, true tablet to combine all the basic features found in other tablets with handwritten notes.

The only technology downside that I can see to the Galaxy Note 10.1 is that it supports Bluetooth 4 via a separately sold adapter. This means, that without the added expense, and attached dongle, you can’t use an external keyboard with the device, unlike other Android tablets or the iPad. This may or may not be an issue for those that are more comfortable with handwritten rather than typed notes, or those that want or need to make numerous document annotations. The lack of mobile broadband options also may or may not be an issue to you as they can be easily remedied by a mobile hotspot or simply ignored if you have ample access to Wi-Fi.

Surface RT works for me because of a near-"real" IE browser (web pages generally work), USB support (huge in my opinion), availability of some desktop components (including PowerShell), and (surprisingly), the Gangnam Style (formerly called MetroUI) two-panel view.

The Microsoft Surface RT tablet runs Windows RT and is powered by an NVIDIA Tegra 3 ARM processor. It will not run the Windows classic desktop or any legacy Windows apps. It will only run the aforementioned, Windows 8 apps obtained through the Windows Store. Other Windows RT tablets are also available from HP, Samsung and Acer.

Pricing Microsoft Surface RT starts at $499 for the 32GB, tablet only version.  If you want the magnetic, black touch cover with your 32GB tablet, it will run you $599. The 64GB version includes the black touch cover and runs $699.

The Kindle Fire is a 7" Android powered tablet running on the Amazon ecosystem. It can run a large selection of Android apps available in the Amazon App Store. Its strengths are its size and its ability to function as an eReader. You may also count the Amazon ecosystem as one of its strengths — the ability to have all of your Amazon music, video and eBook purchases instantly accessible on your device. I think many people will this Holiday Season. The new, recently announced Kindle Fire HD ups the ante in the tablet space and comes in a couple different form factors, with a few different data plan options.

The Kindle Fire HD comes in its traditional 7" form factor; but also an 8.9" form factor with a 1920×1200, 254ppi display, and a laminated, anti-glare touch screen for 25% less glare; and an overall, better visual experience. The 8.9’s OMAP 4470 processor, Android 4.0 OS and stereo speakers, an upgrade over the original Fire’s mono speakers, help round out its improved multimedia experience.

For improved communications, Amazon has equipped the Fire HD with an improved Wi-Fi radio. It now has a dual-band 2.4ghz/5.0ghz receiver with dual antennas and MIMO radio technology. The 4G LTE version sports AT&T connectivity for high speed internet access when you’re out and about. Wi-Fi only models come with 16GB and 32GB of internal storage. 4G models come with either 32GB or 64GB of space.

Amazon is now charging users for Whispersync. If you go the 4G LTE route, you’ll have to cough up $50 bucks a year for a monthly allotment of 250MB of data, 20GB of Amazon Cloud storage and a $10 Amazon App Store credit. If that amount of bandwidth isn’t going to cut it for you, 3GB and 5GB plans will be available for purchase right from the device, but pricing wasn’t available at the time of this writing.

The improvements here are clearly aimed at direct competition with Apple’s New 4th Generation iPad and its iPad mini. The Fire HD, in any of its forms is likely a decent choice for anyone on your gift list wanting a tablet, but needing to be budget conscious. You’re not going to get the same abilities for screen annotations as you do on the Samsung Galaxy Note, though the device will still function well with Evernote and other note taking apps. Please note that Bluetooth support is included on all Kindle Fire HD models, but not with the original Fire.

My best advice when choosing a tablet is to stick to what you know. It’s going to provide the smallest learning curve and the most enjoyment out of the box this Holiday Season.

If you’ve got an iPhone or are really into your iPod Touch, an iPad or iPad Mini might be the best bet. You should also be able to run MOST of the software interchangeably between devices.

If handwritten notes and/or document annotations are important to you, the Galaxy Note 10.1 is a good choice, though there have been some reports of moderate to severe lag between handwriting action to appearance of digital ink on the screen.

If eBooks are your focus, a Kindle Fire HD may be the right choice. Like Apple’s new iPad Mini, the Fire HD’s strengths are its vast eBook library, the device’s portability and easy to read screen. It also has a wealth of Android applications available via the Amazon App Store. Again, sticking to what you know and paring your Android smartphone with an Android tablet will help save money on apps as some may work on more than one device form factor.

Anyway you look at it, tablets are going to be a very popular gift this Holiday Season. While picking the right one may be a matter of familiarity, there’s never a good time to buy a technology product. For example, the iPad 3 was only on the market for six months before Apple discontinued it and replaced it with the iPad 4.  Make sure that you’re going to be happy with the purchase you make, as you’re buying not only the hardware, but into the device maker’s content providing ecosystem as well. Hind sight is nearly always 20-20, and buyer’s remorse can be depressing to live with, especially on the more expensive tablets or other computer equipment.